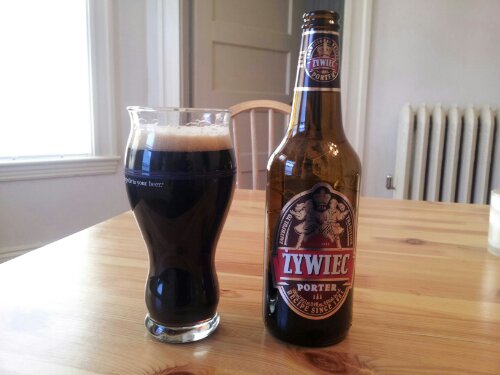 Continuing on along our education of stouts and porters, we have come across our first porter. Now, from everything I have read, porters are a bit of a mystery. Once, a long time ago, porters were an extremely popular form of beer of which stouts a type. But, along the way, porters fell by the wayside and, eventually, people stopped making them entirely. The last porter brewed was by Guinness and they stopped in the mid-seventies. Then, after a good twenty years, people decided to bring back porters based on half-forgotten recipes and old myths of what porters were supposed to be.

As a result, there’s not a lot of consensus of what a porter should taste like, because, in truth, no one knows what one should taste like. Different breweries try their hand at porters and they all come up with different answers to the question: what is a porter?

Today, I tried Zywiec‘s Porter and if all porter’s taste like this, I would drink them more often. It has a very hearty, fruity aroma out of the bottle and the taste followed suit. It tasted like dark cherries, sweet and heady and full of flavor. It had a very smooth and full mouthfeel without being thick and syrupy.

For a type of beer with close ties to stouts, I was surprised to find how refreshing it was. It was clear and strong and wasn’t overwhelming in either texture or taste.

It was very decadent, sweet without a lot of bitterness. I would serve it with a dessert, but a less rich dessert like a white cake or  some vanilla ice cream  It was a great beer, maybe not one that you would all the time or one after the other, but definitely a beer that you would have every once in a while as a way to remind yourself of how different beers can be from one another and how good those differences can be.

I would give this one three chocolate covered cherries and two scoops of vanilla ice cream.

This rating system might prove to be prophetic considering an entry I have planned down the line.

Filed under Food: Cooking It, Eating It and Drinking It

2 responses to “Brewing an Education: Porters and Stouts (Part III)”