31 Days of Spoooktacular: The Horror in the Tin

I really like the show Good Eats with Alton Brown. This is important if you’re to know about The Horror in The Tin and why I did what I did. I need you to understand that I was once very much like you and I was normal. I was so normal.

Alton, I can call him Alton because, in my head, we’re good friends, began to talk about these little fish called brislings and how good they are and how, yes, technically they’re sardines, but they’re still good and healthy and provide valuable nutrients and you should eat them. I laughed at my friend Alton’s claims and shook my head. “I will never eat sardines, Alton. No matter how good you say they are.” Alton didn’t respond, because he’s on the television.

But later, in the grocery store, I kept thinking about those damn little fish. Alton said they were good. He doesn’t lie. Maybe…maybe I could try them. I stood staring at them in store for ten minutes, trying to make up my mind. Finally, I grabbed the most expensive can (because I’ll be goddamned if I buy budget fish in a can) and bought them.

I brought them home and set them on the table. The spider watched me. He would not follow me on this journey, his red eyes reproachful and wary. 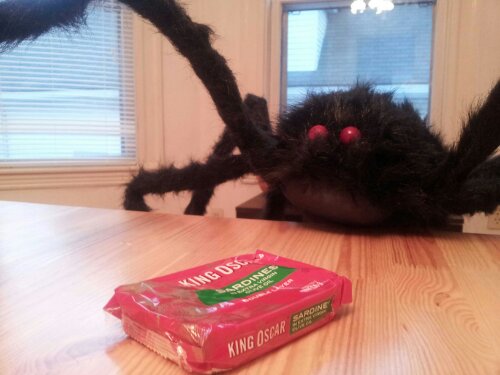 They looked unassuming in their cheerful red wrapper. How bad could it be? How truly awful could this…Horror in the Tin be? 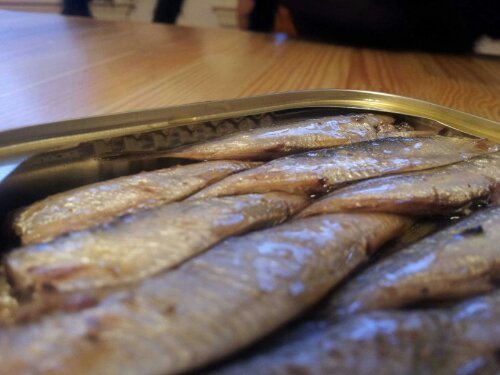 They could be that bad. Immediately upon opening the tin, I was awash in the smell of fish. They lay in their untidy little rows, oily and glistening. I poked them with my chopsticks (Alton recommended eating them with chopsticks) and they broke apart easily, exposing the dark flesh inside, the skin sliding free from the meat. Their fins lay folded flat against their sides, thin membranes stretched between clear points of bone. 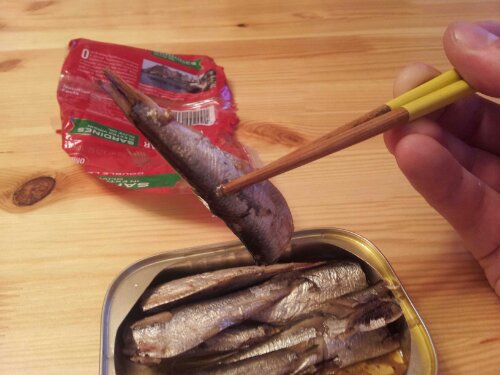 I picked one up, pulling it free from the oil and the other fish. I had been so worried that they’d still have their heads, but that might have been a silly fear. They do not, they did not, look like any kind of appetizing. But, over the years, I’ve learned that it’s best not to dwell and just throw yourself in, even if the water is moving fast and filled with dirt and sticks and poisonous snakes. I ate the little horror from the tin. 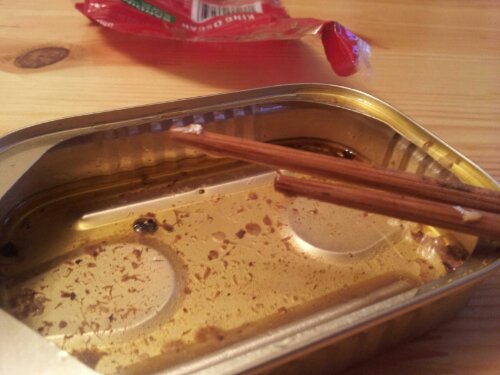 And, as soon as it began, it was over. The tin was empty. Flecks of silver scales and bits of meat and bone floated in the remaining oil. It had been so fast, so brutal and I had eaten them all, consuming the horror with relish and without pausing and, by the end, I realized that it was I that was the horror the WHOLE TIME.

They were pretty good. I’d probably get them again.

3 responses to “31 Days of Spoooktacular: The Horror in the Tin”