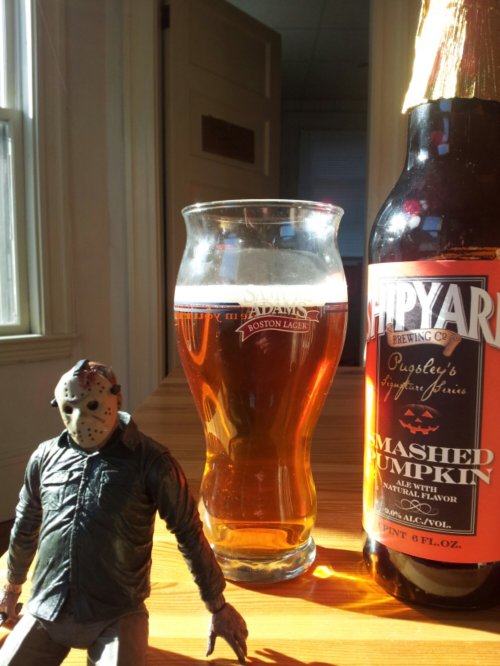 Like before, let’s start off with my review of the beer, Shipyard Smashed Pumpkin. I smell cinnamon.  I taste cinnamon.  This is a cinnamon beer. There’s not much in the way of pumpkins here. I’m not sure what cinnamon has to do with pumpkins aside from pumpin pie, but, at least in the eyes of brewers, pumpkin flavor has become irrevocably linked with cinnamon. This is not as watery as some other beers that rely so heavily on cinnamon and is a pretty solid beer through and through. It’s just disappointing that they rely so heavily on a spice that is only tangentially related to pumpkins.

Alice in Murderland is a movie I started off hating and ended up liking because of its plucky charm. It’s one of those low budget horror movies that relies heavily on treading that fine line between black comedy and horror. It tries to be funny and it tries to be sca2ry and, in all honesty, it doesn’t do either one very well. It’s not scary or gorey enough to count as horror. The kill scenes are lackluster and most everything happens off camera. And it’s just not that funny, though there are moments that are humorous.

There are a few moments where the acting rises above what it should; Malerie Grady, Kelly Kula and Heath Butler all manage to make the most of it and the ending was what it was because Miss Grady just went balls to the walls crazy with her laughter. Kula brought home some truly intense moments of sadism and Butler was poignantly ditzy and actually provoked an emotion in me beyond wry cynicism.  Those three managed to bring enough to the table to ensure that I wouldn’t just write off Murderland.

Also, what event is Alice in Murderland supposed to be based on? I don’t really want to research it. Someone just tell me.

The beer and the movie were perfectly matched here. It’s time for our third and final filmbrew.